Observations on Cycling in Morocco

Hey, I had another holiday, lucky me. Again.

Yet again it was another holiday that didn't involve any cycling for me, but my cycley-senses were tingling and I found myself taking pics of bikes and noting cycling infrastructure and culture.  I wasn't walking around with a clipboard checking off against Gehl's four C's, but figure may as well keep at least one post a year up on here.


I always find it a little sad not to be cycling in new cities.  But I'm not David Byrne so just observe and toe the tourist trail.  But I found it a little more acute in Morocco as I have always associated Morocco, and particularly the Atlas Mountains with the possibility of amazing riding ever since it was recommended by the brain surgeon from Idaho on my Nepalese mountain biking adventure back in 2003.  I noted a few tourers out in the more sparsely populated areas, and while sitting up in a minibus over the mountains to the desert was quite taken by the potential of riding some of those routes.  Sure they'd have been hairy, but would have been more engaging than an 8 hour bumpy minibus journey. 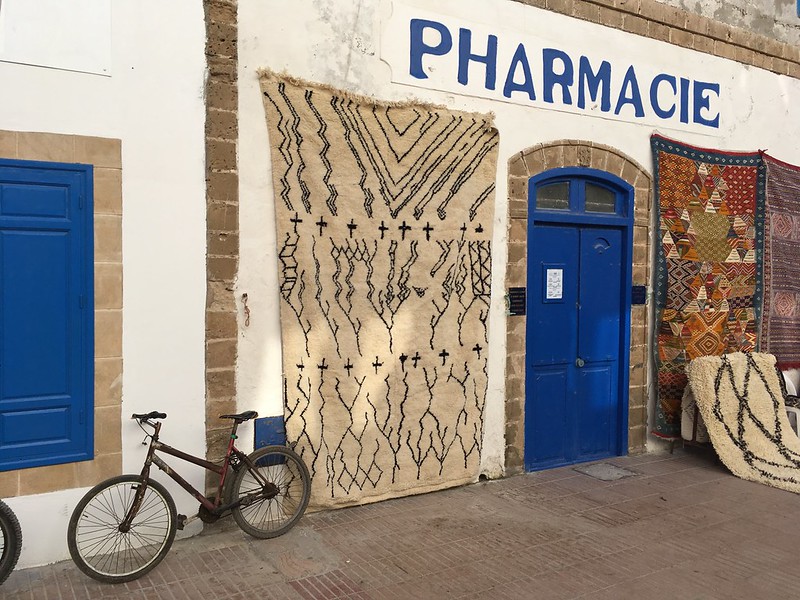 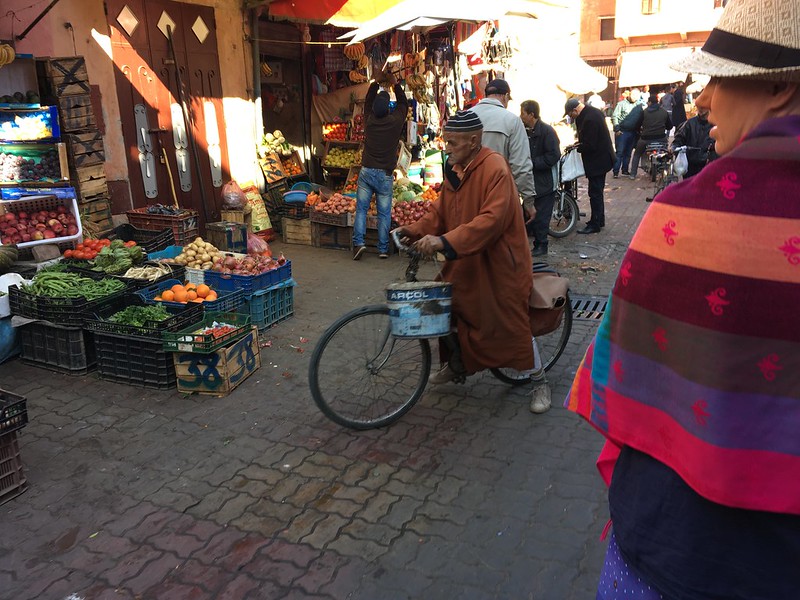 We were staying quite well within the Medina; the windy disorientating mesh of streets and souks that constitute the old city.  It seems a crash bang mix of sustainable street scenes, allowing interactions and interactivity with your surroundings whilst also being claustrophobic, overwhelmingly fume-y, authentically Moroccan and massively touristy.  Streets less than two meters wide carry pedestrians, bikes, scooters - so many scooters- donkeys, carts, taxi's and all other manner of street hawkers and sellers.  I'm not sure if there are any hard and fast rules, but everyone is keen to point out the preference that you "walk on the right".  Having watched Jim Henson's Labyrinth over Christmas a couple of days before I arrived couldn't have been better preparation.  It feels like the city is purposely trying to get you lost. 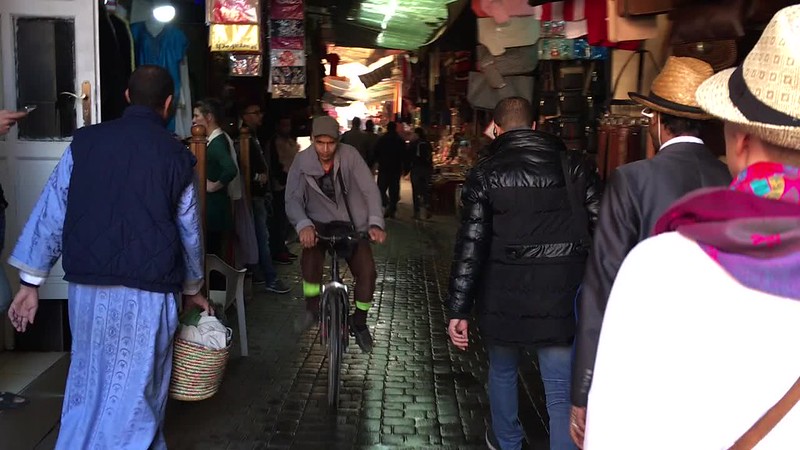 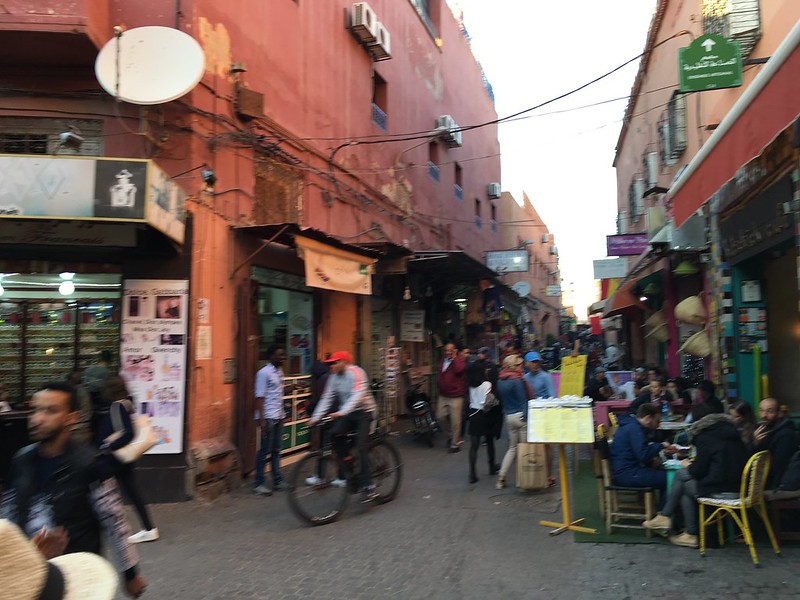 So it does seem a bit full on mixing all those transportation modes.  Then when exploring further than the Medina on a walk down to the station (which is a wonderful building) the larger roads around the city are so hectic.  Didn't seem appealing to me in the slightest to give them a go on a bike.  But at the same time there was minimal sign of excessive protective equipment; hi-viz and helmets and such.  The general carnage and hecticness of the roads seems, from my on the hoof observations at least, to have a self-corrective element and all road users seem to know the rules, which seem mainly to keep your wits about you.  I didn't see any aggressive confrontations, sure some robust vocal warnings, but nothing beyond self corrective, and no indication of entitlement from any road user. 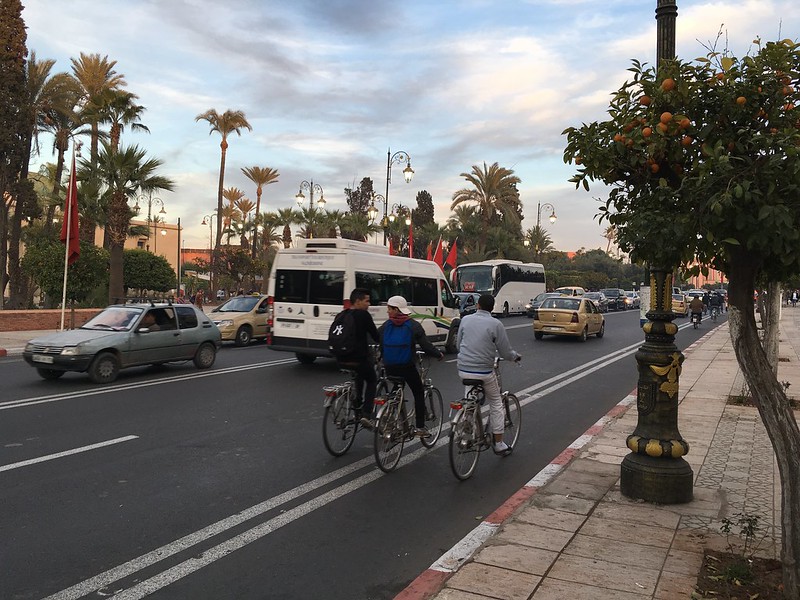 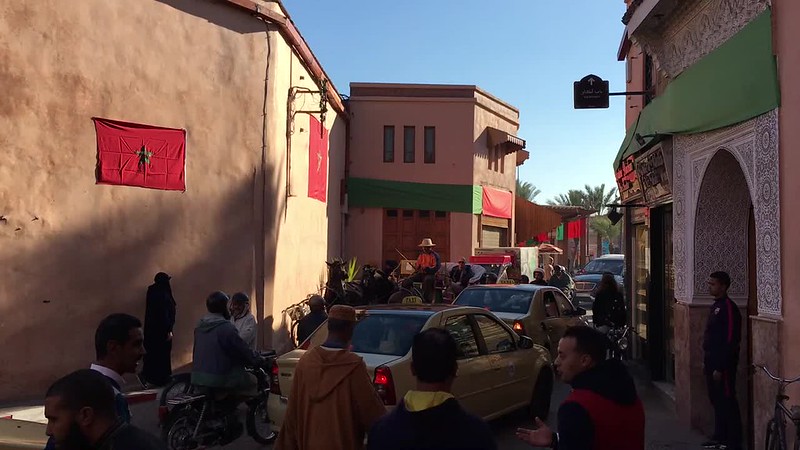 I took interest in the local bike hire scheme: Medina Bike  which from a quick google search is heralded as Africa's first bike share.  I didn't partake, but damn, it would take a pretty assured visitor to take to those streets unaided on a hire bike.  they come with helmets attached, even though it is quite evident that helmets are not compulsory, or they are and NO ONE adheres to that rule.  Now after skimming over this Guardian article  I realise that i could have done a little more background reading and that there is clearly a history of heavy bike use and the desire to recreate that in the city, but hey these are just my observations.  Nevertheless will be interesting to see how the Medina bike takes off.  It certainly is quite a hostile cycling environment for the uninitiated, but as with any initially offensive environment anything to build up to a critical mass is going to help. 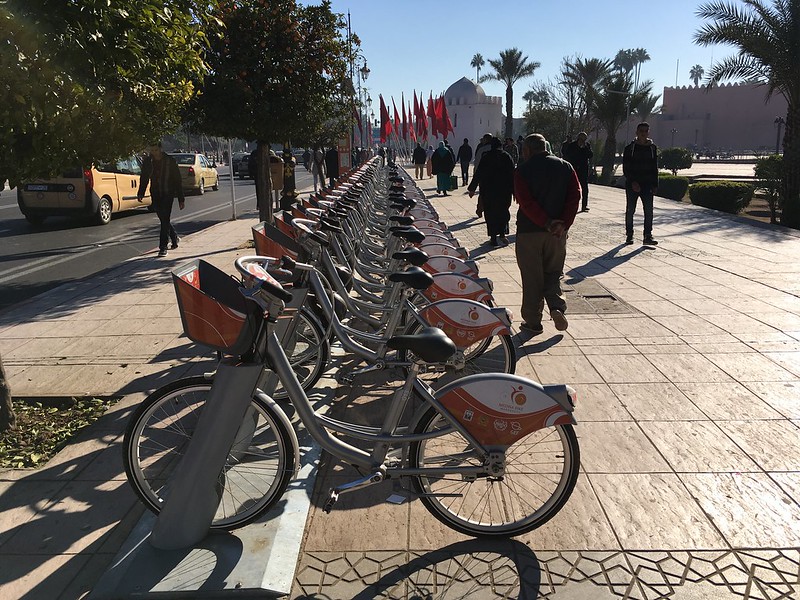 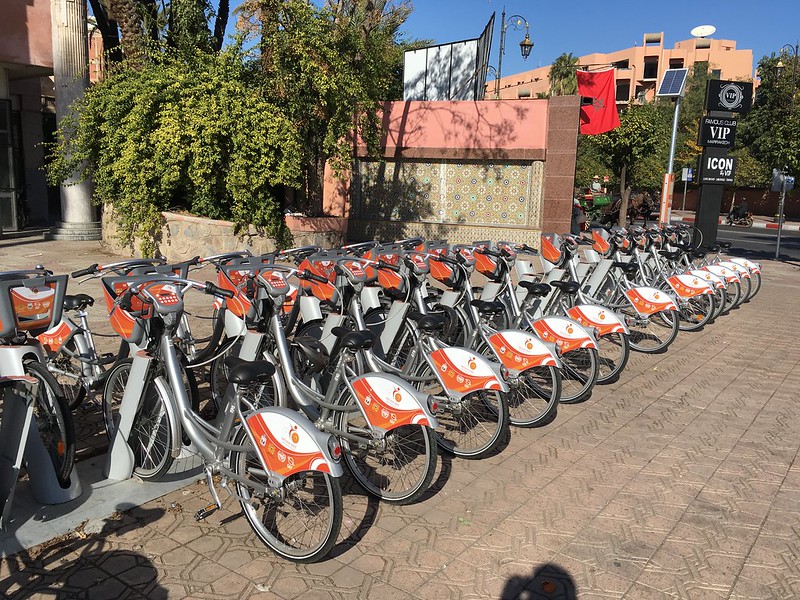 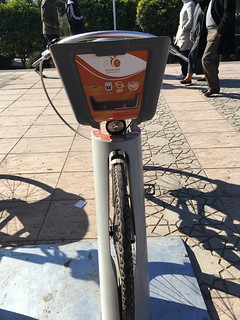 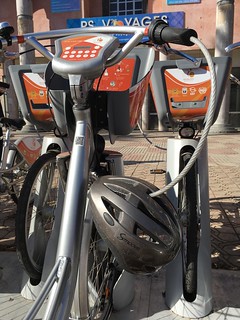 Most of the bikes that I noticed looked like they had had a lot of riding.  A variety of old city bikes and what i assumed to be second hand mountain bikes.  Sure a little research could unveil where from but I made the assumption that probably lots are probably those that are cast off from richer cities as too out of shape and found to be perfectly functional for the purpose they are meant for.  Or is this just me being a first world snob assuming that poor little Morocco can't afford fancy new bikes.  I don't mean to be rude, but either way it is good to see bikes being used efficiently.  Many with well loaded racks to carry shopping and goods.  There were also quite a few little repair places I noticed around the way, which aren't completly foreign to the small workshops I've frequented in Brighton and London, but a fun observation in situ in the Moroccan sun.
The topography isn't too taxing (if you're keeping in and around the city) and the temperature doesn't seem to be particularly ice prone so I imagine as long as the chainset and brakes are functional multi-gears and disc-brakes are superflous to getting around the city efficiently and most repairs will just be keeping the clunkers running. 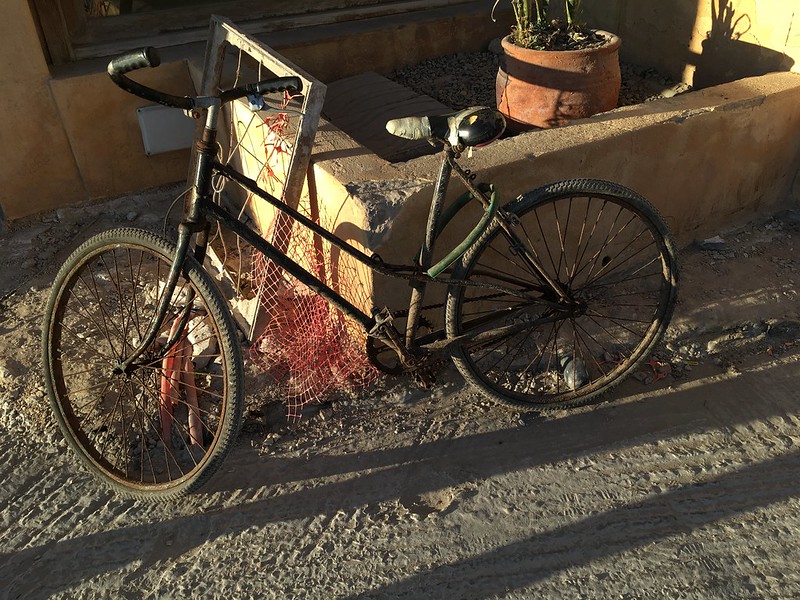 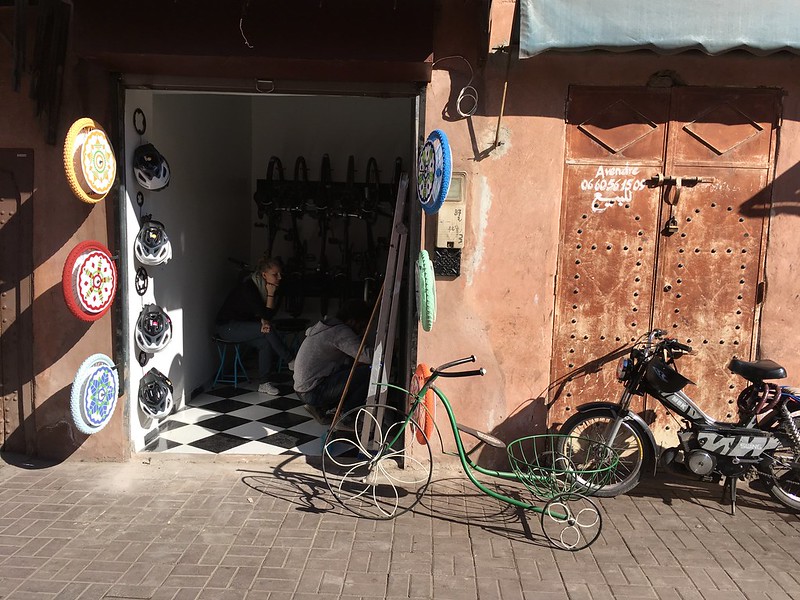 What I found uplifting was that bikes are evidently being used for what they're great at: an efficient way to get around town.  No fancy pants aero bars or excessive kit (Though I think i did see a few roadies on the coach out to Essouaria).  This was even more evident out in the sticks.  Schools out in rural areas were swamped by bikes outside.  More useful than the camels now sidelined to tourist duties.  In comparing to other cycling cities and places I've adventured through there is a hint that cycling is, or was, more ingrained, and that there are more practical reasons such as space and cost that bikes are popular. 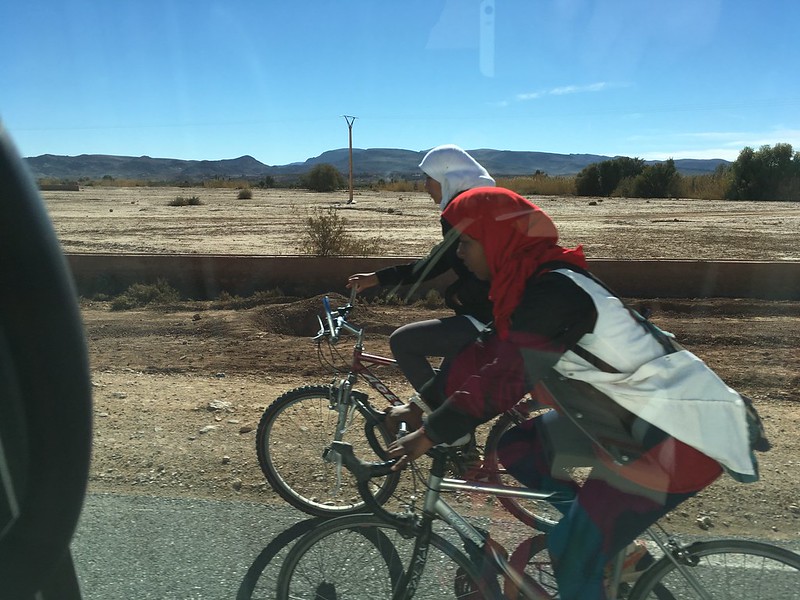 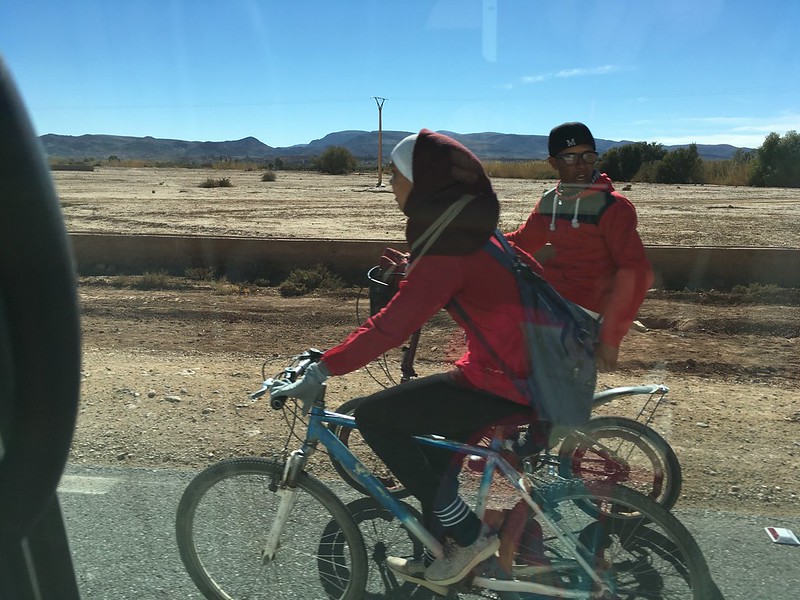 So what did I learn in my trip?  Well I would love to return and do some proper mountain bike touring, get out of the main city and actually engage with the country, take part rather than be a full on tourist.  Bikes are cool.  Marrakesh has some very groovy little nooks and crannys. Oh and I need to get a clipboard and brush up on my urban analysis. 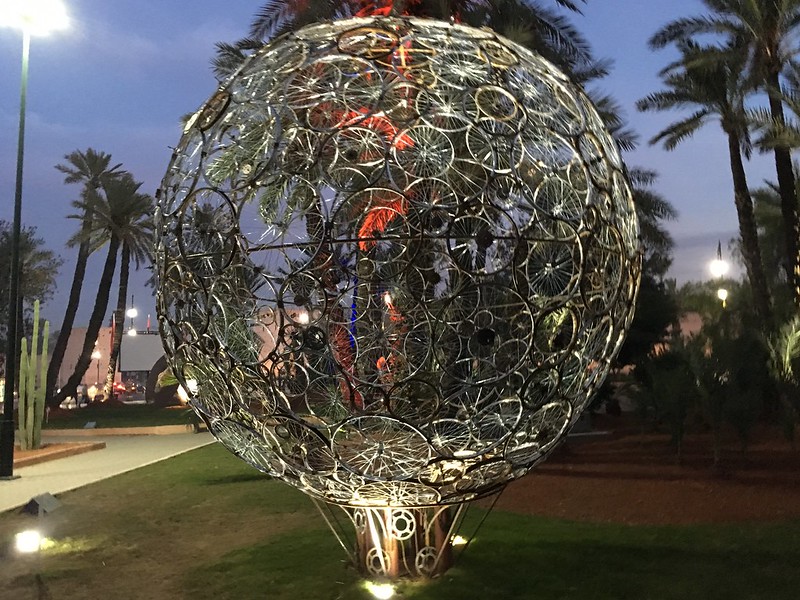