SW to B'Ton Via SDW

Had my most strenuous cycling weekend in some time this weekend. Leaving from South Warnborough on Friday morning I had a rough course written out to take me to Cocking, where I would pick up the South Downs Way, and follow that to Devils Dyke and down into Brighton. Though I made a wrong turn on the roads between Liphook & Midhurst I managed to get to the turn off for the South Downs Way Just after 1pm.

After having stopped off for some lucozade and brownie in Cocking it gave me the boost to ride up the hill and on for the first 5 miles or so of the South Downs Way. It was a perfect day, hot, but slightly overcast to give relief from the worst of the sun's heat. And it was very good to be on the relatively empty trail. Before my lunch break I only saw 3 other walkers and a tractor. I got to a spot at the top of an incline and stopped off for my sandwiches.

Shortly after my lunch and brief photography session I was joined by a group of about 8 cyclists who had ridden from Winchester that morning. Then coming the other way a guy on a fold up bike came up the hill Geocaching.

I let the other group go ahead, packed up and followed the signs down the hill. The route is very well signed all in all, and most of the trail is pretty intuitive really, but there are a couple of spots when you're careering down a hill and cane it past a signpost and have to hope that you've not missed a turning. Luckily i didn't have to turn back on myself throughout the trip. 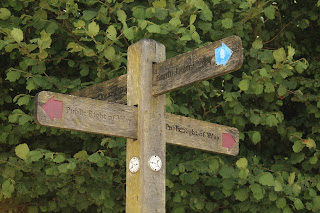 After my break and first few miles I was slowly realising that the 'Ups and downs' may be a more appropriate. There weren't really any mad hills, though i do have to admit to having got off and pushed on 3 occasions, partly due to a lack of match fitness, and a little more weight than I had hoped to be carrying (on myself and the bike). All in all it was a reminder of how much more of a challenge it is riding the ups and downs rather than all the relatively flat roads and bridle paths around that I have been recently. I was pretty knackered and hankering after a beer and a shower. The temperature had dropped considerably and I was later than i had hoped to be. I rested for a short bit and hoiked my way back down hill into Brighton. If I had not been slamming it down the hill so fast I sped right past the sign for the regional route 82 which would have been a more cycle friendly route, but I stuck to the traffic being familiar with these roads by now.

I got into the hotel showered and sucked down a couple of beers pretty promptly. Whadda Day! Means I now only have the first 30 miles of South Downs Way from Winchester to Cocking and I've covered the whole thing. I'm pretty sure that with a little more training I could do the trail end to end in a long day with no baggage, it's just the requirements for a little support and a change of clothes. To be continued...
No comments:

Well, I'm clearly not quite into the full swing of this blogging malarkey yet.

Just to keep 'in touch' there was Critical Mass, a few country rides, more research and more news stories as well as a little road foolishness.

I was riding out today and did make abad manouver undertaking a car in a dodgy position. Not really any justification and i should really know better, but when the driver of the car overtook and took exception to me vocally, and it must be said relativly politely, it firstly made me angry to be put in my place, and then i realised i needed to be put in my place. Bad ben.

Anyway, perfect time of year for lots of riding, still researching various movements trying to improve cycling, but because of employment knockbacks haven't been too inclined to note too many of them.

Will try harder!
No comments: