Observations on Cycling in Japan

Because I am:
a planner
an international urban researcher
a lifelong cyclist
someone who recently returned from time in Japan
the owner of a poorly maintained blog
reflecting on the points above,
I will make a few notes on my observations on cycling in Japan.

I was there for a holiday, like a proper holiday.  No research, no meetings, no homework, no obligations.  Just for fun and leisure and exploration, well I'm sure you know what a holiday is.  The only things I aimed  to achieve, specifically, while there were: to spend a day or more exploring Tokyo by bike; and find some super cool unknown top quality cocktail bar in a tower somewhere that's not in any guidebooks and serves sublime cocktails.  I technically 'failed' on both those counts, but I did get to explore plenty of Tokyo on foot and subway, and if I were you, shouldn't worry about me not getting to sample enough cocktails in trendy bars, as in Takayama I had one of the top 5 bar experiences of my life (a list for another time).

In my ventures around and about I was picking out little bits of cycle infrastructure or culture or activity that caught my eye.  Mindful that I am just a passing tourist, and without having really got to chat with many locals, or planners, these really are just some pictures for prosperity, memories of my adventures in Japan and impressions of cycling in cities there. 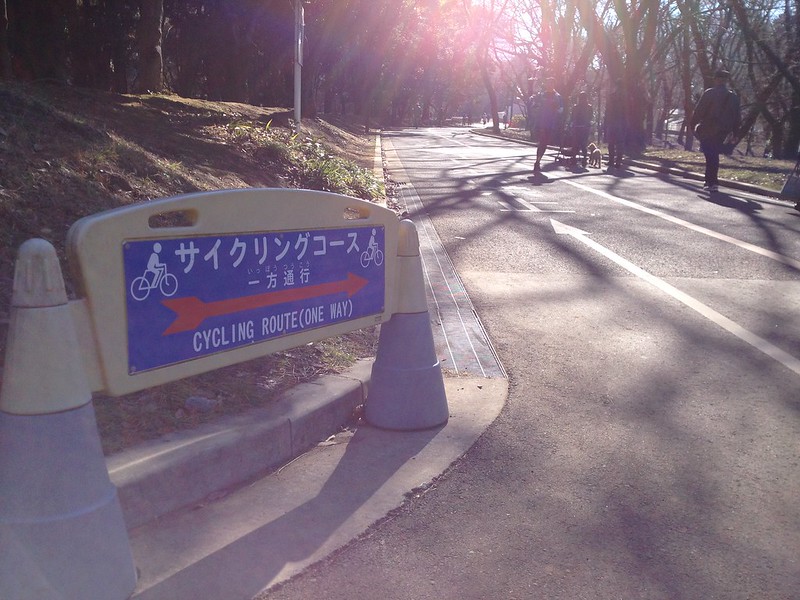 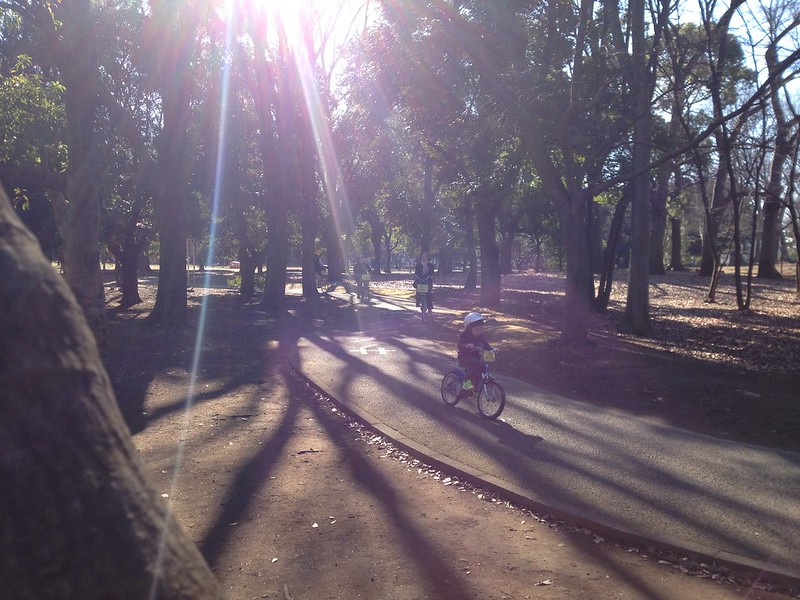 On the first day, suffering with jet lag, or more, riding the elation & floatiness of jet-lag in a new and exciting city we took a walk from our air BnB in Shibuya up to Tomigaya, and into Yoyogi Park.  The first cycling infrastructure of note was a nice little leisure circuit in the park, which lifted my spirits, even without a bike.  Although only in so much as it's nice to have a nice place to cycle safely round in a sunny park in winter time when you're a nipper on wheels, or uneasy grown-up.  Oh and the sun helped too.

Wondering round Harajuku and Sendagaya that afternoon I was just soaking the city in.  But noticed that there did seem to be plenty of bikes about, with parking solutions for apartment blocks.  The bikes I notice were mostly quite functional, practical models, with slightly smaller wheels than I'm used to that can happily be parked up on a stand outside the block, or shops, rather than an array of swish mean machines. 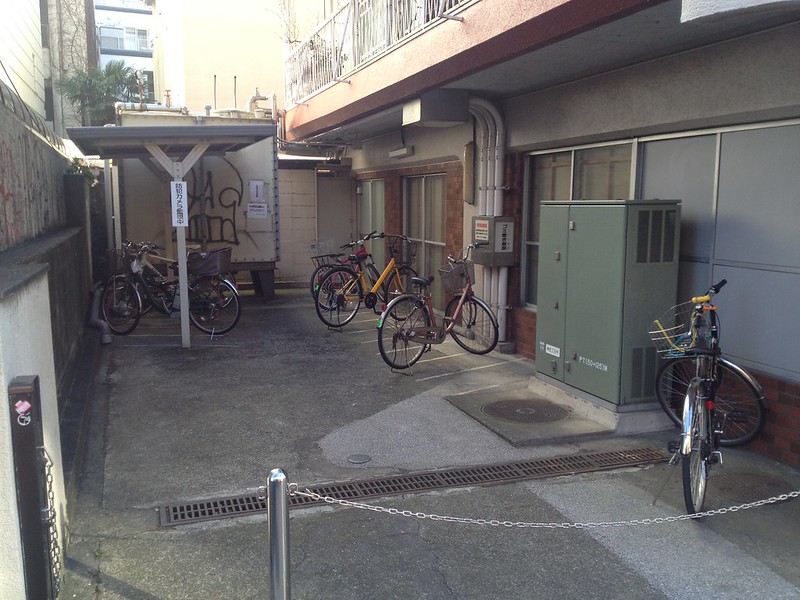 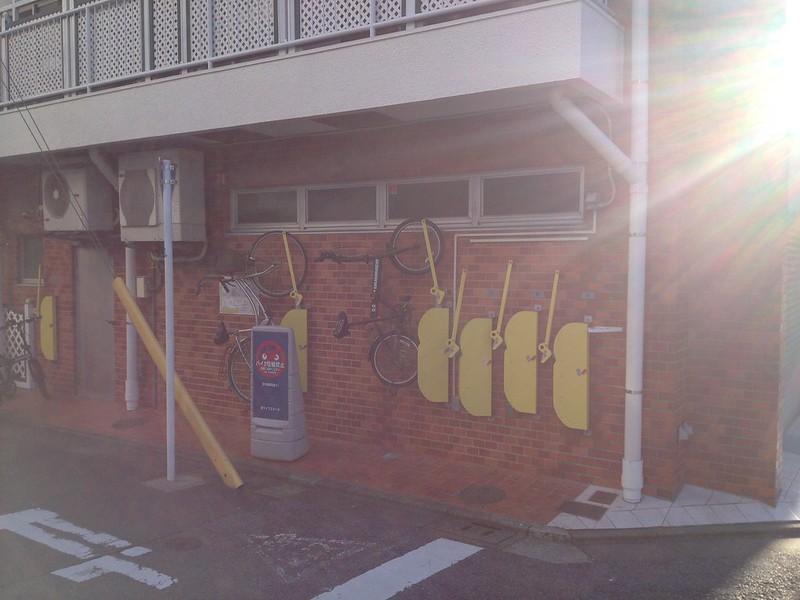 Even though I was up with the larks (hmmm, not sure there were any larks, well of course there were larks, it was a holiday after all. I'm not a natural, or trained ornithologist, but I was up early because of the time difference ...) I didn't really notice any rush hour hordes of cycle commuters battling with traffic to get to work in the morning.  There isn't a whole load of infrastructure to speak of, I saw a fair bit of shared space, and generally bikes are treated closer to a pedestrian on wheels than to a vehicle. 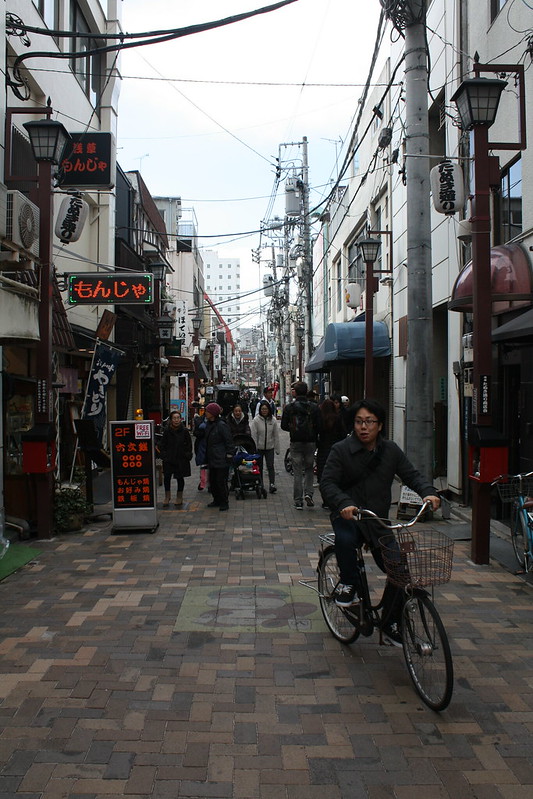 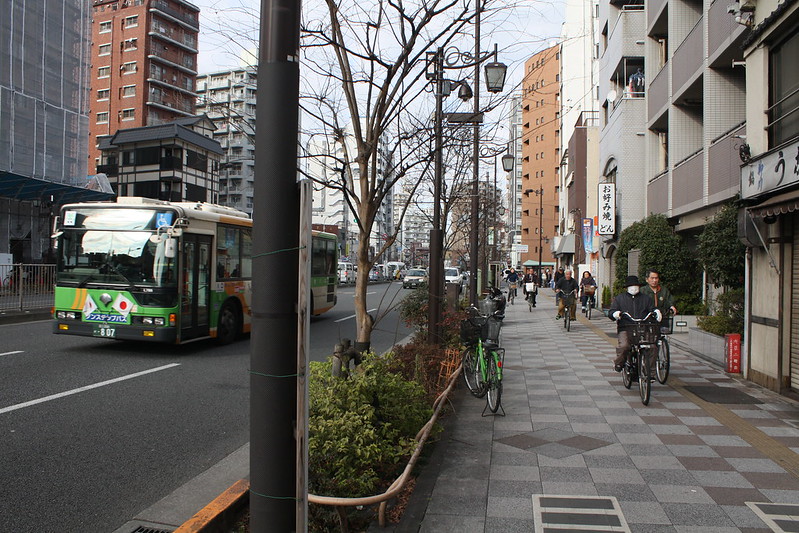 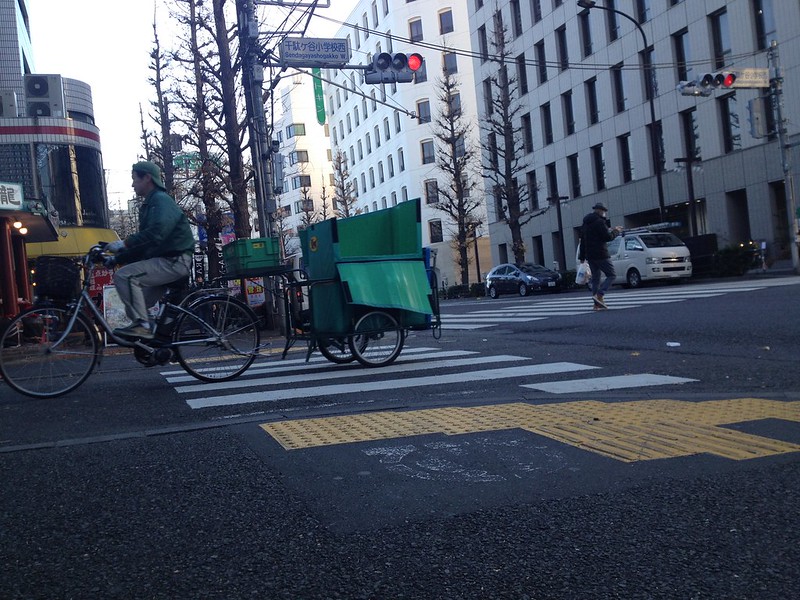 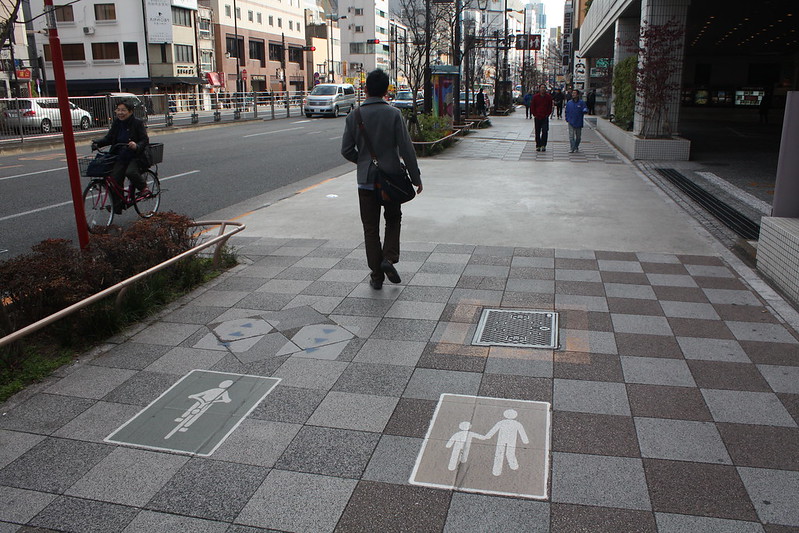 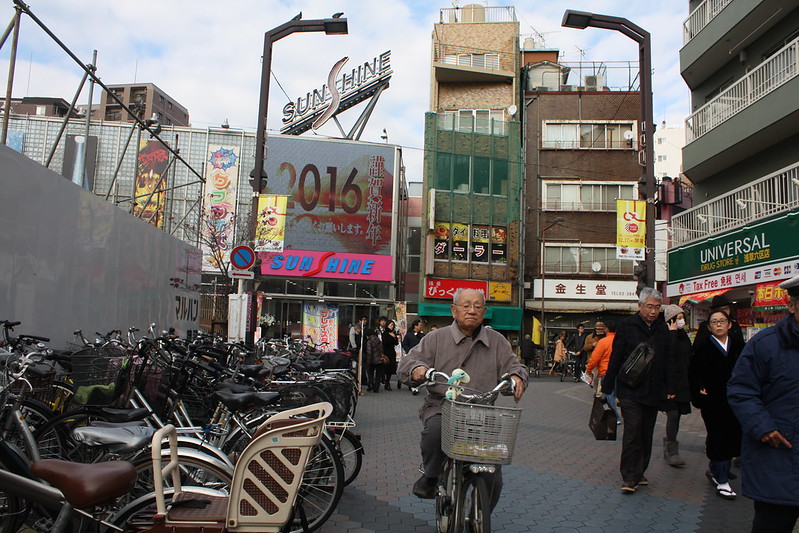 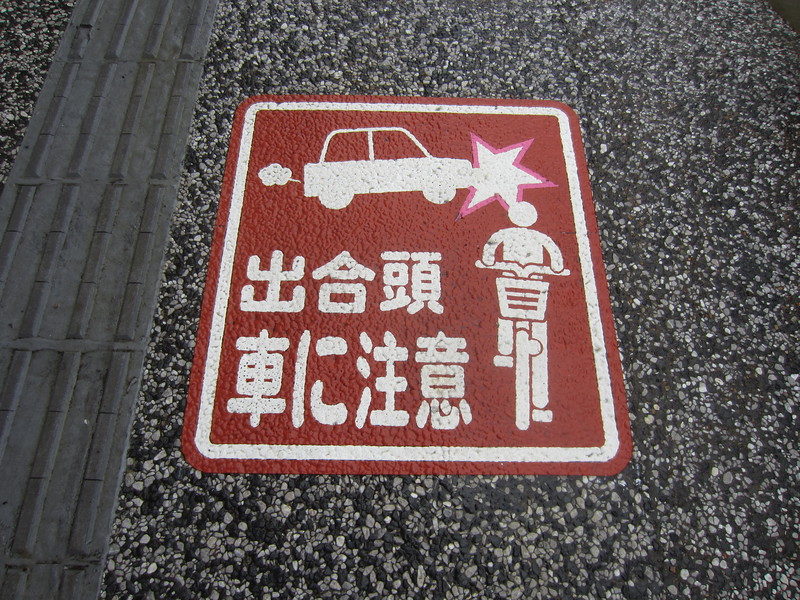 By and large my impression was that cycling isn't fetishised or marginalised, for those that want to use it it is a handy practical way to get around.  There is plentiful, but oversubscribed parking in the kinds of places you would need to park your bike like near stations or shopping centers.   Most the people I noticed cycling were older, so away from the image there is in London of cycling being predominately young men caning it into work and back. 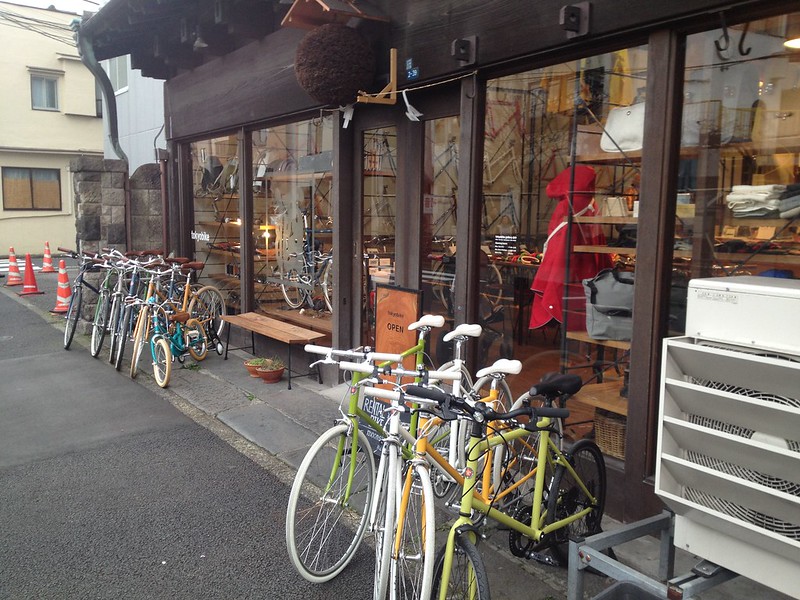 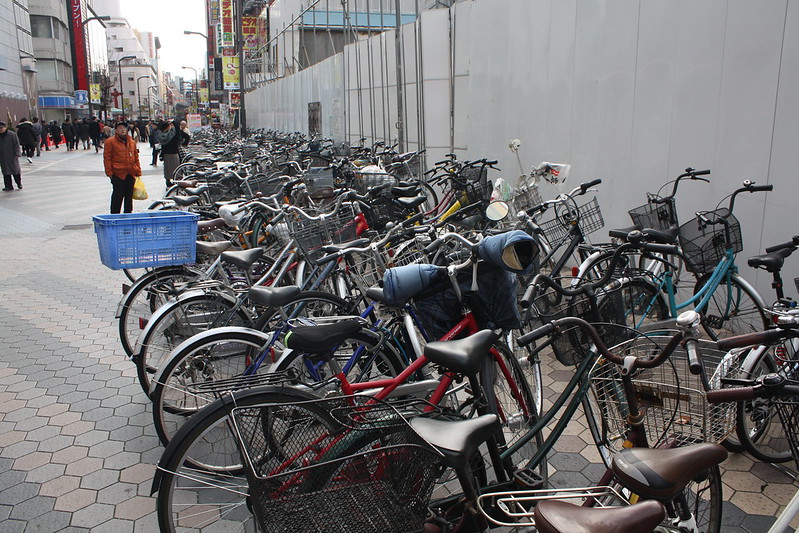 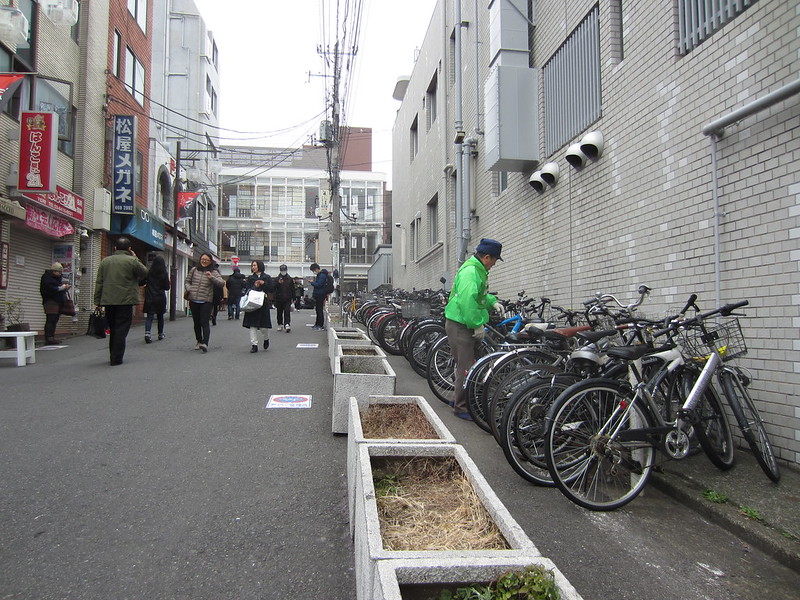 On our trip out of Tokyo there was a nifty little bike share scheme in Kanazawa, but due to snow and a very limited time in the city I didn't get a bike, though it was as straight forward as having a credit card and a few simple details to get access to a bike on a similar fare structure as the London cycle hire scheme. 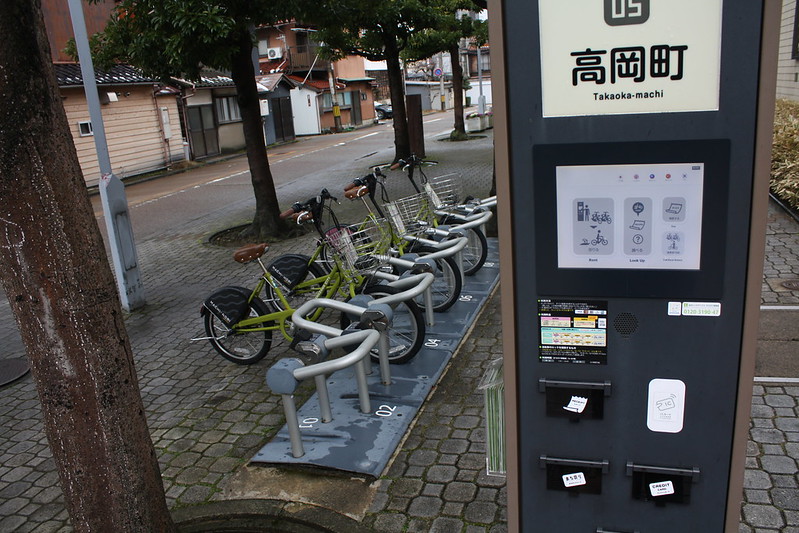 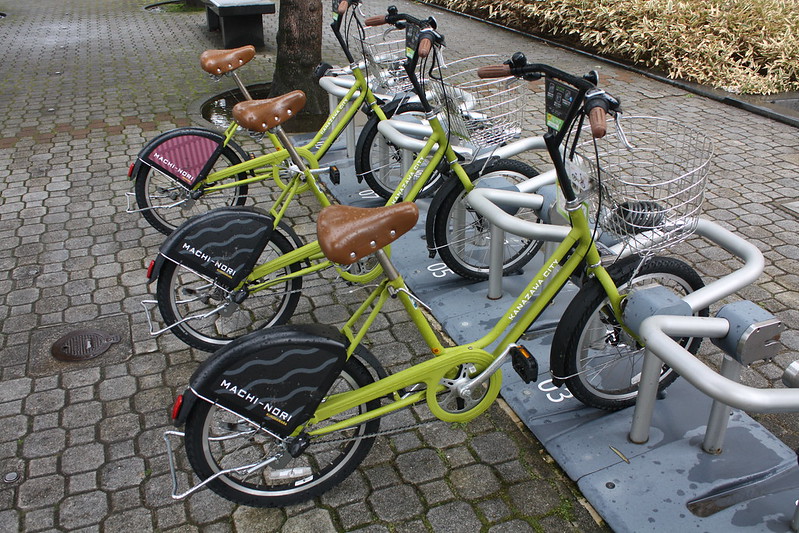 Of course there were a few of the cool fixies flying about and I saw a few roadies out on a Sunday, but their kit wasn't all that streamlined, even if it was January it wasn't super cold.  However, the prospect of trying to escape the city on a bike seems even more of a task there than London.  I bemoan my hour or two on the saddle before I breach the M25 and am making it towards countryside, but in a city where it takes over an hour on the bullet train to get out of the city, there must be little chance except to the most hardened rider to cycle to 'the country'. 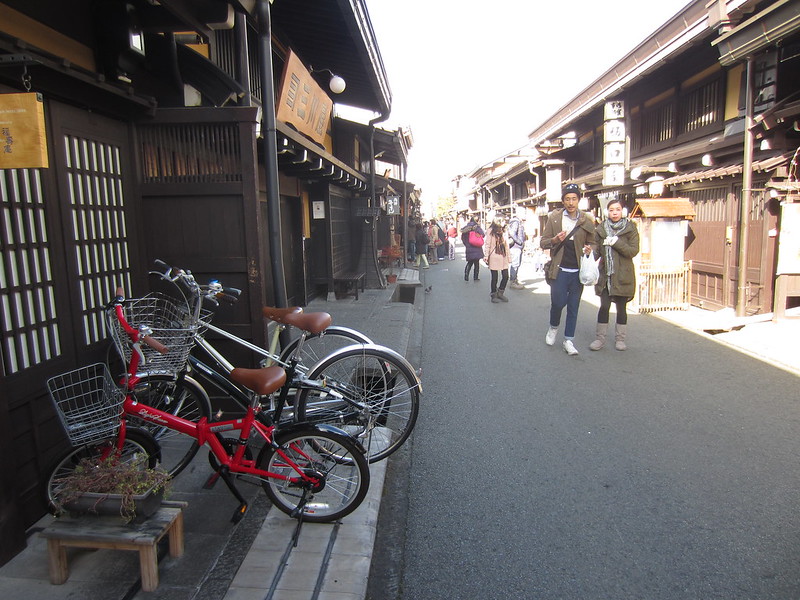 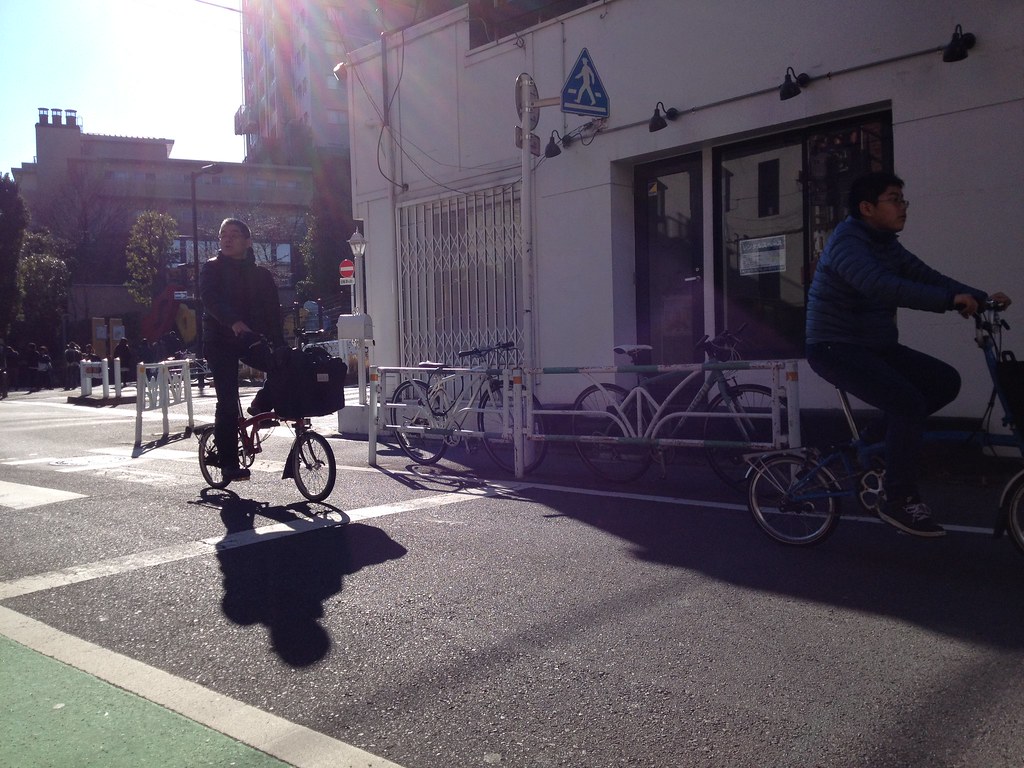 Taking in the whole experience of Japan for the first, amazing, time was a bit much, and I found the whole trip very exhilarating and eye-opening.  The positive feelings about the country, like the food, drink, hospitality, seamless transportation.  oh, and the fact that I was on holiday and free to enjoy it all as a goggle eyed, beer filled tourist with too many cameras and no research base, meant that I saw all the good and none of the bad.  In terms of cycling, as with other aspects of infrastructure, I'm sure there is lots that could be done better, especially in Tokyo.  But when you have such an effective metro and public transportation system (from my experience) then why bother?  The 'culture' of cycling seems to be that it's there if you want it.  Nothing flash, no need to really try too hard.  But then this was one of the best aspects from my point of view, there wasn't a fight or any flash about riding, it is reasonably incorporated into the urban fabric, in a city that, in movement terms seems to work pretty well from a casual observers POV.

I for one would love the chance, and lets hope I can one day, to go back and ride around, maybe meet a few people involved in planning and cycling get a better idea of the wider scene and cycling cultures there.  Overall I'm giving it a big thumbs up on the Hockman cycling cities experiences, even though I didn't cycle there. But there's a lot more to say about broader urbanisation and city making and the general experience of Japan more widely, so let me sit with those ideas for a while and I'll get back to ya. 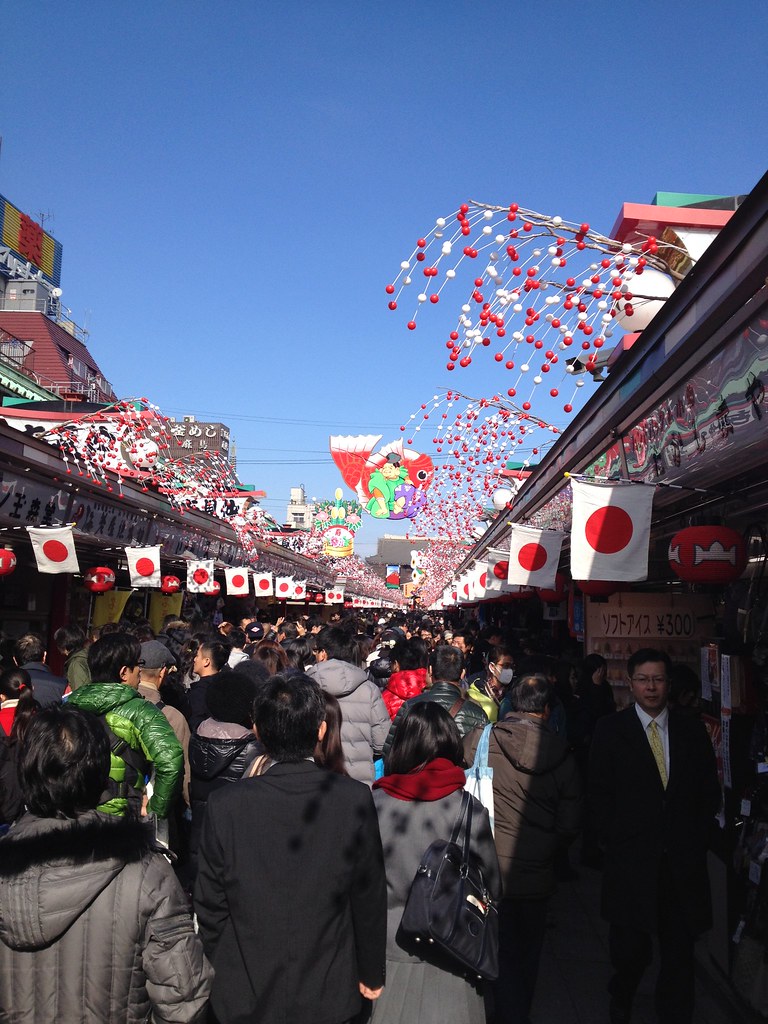